scroll down for feature films

Find us at Kiosque No 02.10, Pavillon du Canada

In the future, Joseph enters a bookshop searching for an Italian writer. While he searches for the name “Firenze” in the database, he recounts the story of a woman he had met 30 years previously.

Lisbon, 2007: Joseph is a tormented American seminarian, a member of Opus Dei, who has come to Lisbon to help organize an exhibition of the Franciscan Order in Lisbon’s Cathedral. The exhibition brings to Portugal a legendary mirror, “The Mirror of St. Francis of Assisi”, that was said to have allowed St Francis to see the next morning.

On the day of his departure, Joseph, at the train station, literally bumps into Giulia, a beautiful and irreverent Italian writer with whom he establishes an immediate chemistry. Giulia tells Joseph she came to Lisbon to try to find a mysterious Portuguese singer who her father had a relationship with in Lisbon before he left to fight for the Portuguese in their colonial war. In the final letters that this woman had sent to Giulia’s father, her passion and feeling of abandonment seemed to be driving her to insanity. She was obviously unaware that an accident of war left her loving soldier with no memories of his past and unable to respond. Giulia came to Lisbon to bring the tragic news of her father’s death and to return her the letters… but the singer has seemed to disappear.

Joseph, fascinated by her story, suggests that he and Giulia take advantage of the 12 hour of delay of their trains, caused by the Pope’s visit to Portugal, to try to find the lost singer. The two depart on a journey around Lisbon, and discover a mystical city where they experience an adventure of mutual discovery, of attraction, of secrets and revelations… and of intimacy and desire.

Seemingly, the loneliest boy in the world has met the saddest girl and they can only fail to share a future togetherÖ yet, both with a tragic past, the new revelations and the old secrets draw them even closer…

Then Giulia promises Joseph: “If one day you find my book, youíll find me as well.”

Steve (Endres Hules) a dancer turned impressario returns from Canada to his native Hungary after 20 years. Communism is over, but the family-run dance company brings Steve into contact with old flames and new challenges in this dance-driven drama expertly shot with cinematographer Vilmos Zigmond (The Deer Hunter, Close Encounters of the Third Kind, Deliverance)

Between Kings and Queens will make you laugh and cry.

Between Kings and Queens is the story of a prince from Africa, who seeks to escape his royal duties by fleeing to America. Torn between new love and free will, his immigrant experience in the land of liberty quickly unravels as he finds himself running for his life.

A film that questions the validity of achieving happiness in a society that would in essence, contest this goal. Kalu is forced to decide between the risk of facing the law and the loss of morality a catharatic moment in realization of his own identity in the land of liberty……freedom. 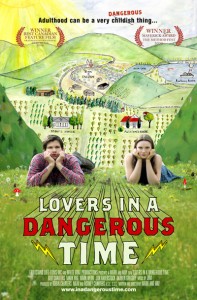 “Lovers in a Dangerous Time” Canada 2009

It’s an award-winning comedy about youthful regrets, a love story without consummation, a return to a home that was never forgotten. A story where boy meets girl, only they have known each other since they were two. It’s a romance, Canadian style.
Childhood friends Todd and Allison are reunited at their high school reunion after their lives have gone in widely different directions. Ten years after graduation, Todd remains a local could-have-been, while Allison illustrates childrens books and wonders what might-have-been if she had stayed in her hometown. Fueled by hope, longing, and nostalgia, they embark on a romantic, if illusory, adventure to recapture lost love and happiness.

CLICK TO SEE “LOVERS IN A DANGEROUS TIME” TRAILER